Pandemic Madness, purchase 6 bottles or more get 20% off.

Ikavina Wine and Spirits, LLC is a Delaware based company founded in 2014.

If you ever watched the series "Entourage" and saw the scene after the credits in the series finale where Ari is in Italy and receives a call to step up and replace someone else, now having ownership [and not just a say] in movies, merchandising, etc., well that's what I am envisioning in the long term. If you haven't seen that episode and that scene, definitely look at it.

Quintessentially, IkaVina is a wine and spirits company that is focused on wine [and spirits of course], but that will also incorporate other elements and industries through strategic partnerships and cross collaborations. This will not only build brand awareness directly, but also through product placement in a variety of mediums. We are looking to also be into film and video, music, art, fashion, web and whatever else might come our way that we can do. But we are all about the wine!

We are not looking to get rich overnight, nor are we looking to act and move like so many other wine labels, wine producers, wine importers or wine distributors. We will be small and nimble and have a bevy of in-house and affiliated talent who is not above putting in the work and getting dirty where necessary (the latter refers to actually not being above mopping the floors or taking out the garbage). 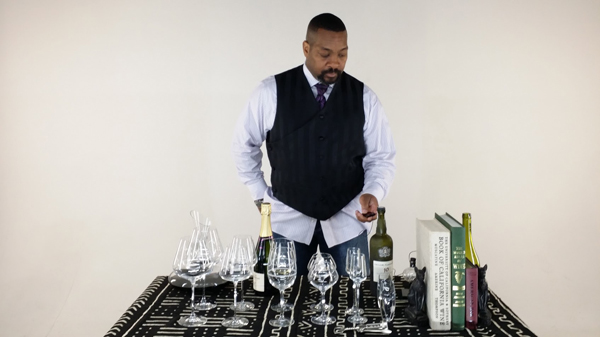 When you think of wine professionals, does the image which immediately comes to your mind resemble someone somewhat stuffy, who wants to prattle on and on about things like terroir with a haughty attitude? Well, I'm definitely not like that, and I can't stand those folks either.

West Philadelphia borned and raised... yup, I grew up in Wynnefield from birth to just around 14, around six blocks away from Will Smith; then we moved to U City (still West Philly). The basics are that I graduated from the G.W. Carver High School for Engineering in Science -- go Engineers!! -- did a brief stint in the Navy, and then went on and studied at Penn State. Now, let's go a little bit further.

One could say that I would one day be involved in wine and spirits because my father used to put bourbon, scotch or whiskey on his finger and let me suck on it as an infant; that old trick to make babies go to sleep. In college, I had an affinity for microbrews and imported beers, and by that I am not talking Heineken. After college, I got more into imported and specialty beers [long before the whole American craft brew movement started] but it was at a wine tasting fundraiser where I was moved by both a Madeira and a Chenin Blanc. I will admit that for awhile I used to rock Sutter Home Chenin Blanc and their Moscato, but I also used to love Allegro Moscato; I just knew I was fancy with that! Slowly, I started to move from being a novice wine drinker to really starting to get to know wines, not just the sweet stuff that is consumed in mass quantities by some US drinkers.

In mid-2006, I happened into a restaurant in Philly on a Friday night, and they were having a weekly wine tasting which from then on, I probably didn't miss one for the next five years or so. This introduced me to sales reps, importers, export managers and wine producers. I would soon build and launch The Black Winer where I would just do an informal review of wines (I stopped writing articles and reviews because I got to a point of tasting things that many folks wouldn't get to try, but I am looking at resuming it and getting some new blood in there). This led to me doing a couple of wine events where the goal was to do a television show -- I still have the treatments and this is also next on the list -- which in turn led me into meeting a person who was an importer and distributor with at least five brands/labels of his own. Between one of these events and also pouring at the Chocolate Festival in NY for Quady Winery, it could be said that this was the life for me. Anyway, after putting together a meeting between this importer and a producer I knew regarding a wine I liked, I realized that I could get into this game, if I had the funding; we know that's always the caveat! I should also note that between 2006 and that time, I started attending a ton of trade shows and portfolio tastings, mostly in New York, but from Manhattan down to Washington, D.C.

So, along this path, my love and passion for wine have taken me to Italy, Spain and Portugal numerous times for trade shows and smaller junkets, and has allowed me to be exposed to, learn about, and meet producers of wines from those countries as well as Greece, Macedonia, France, Moldova, Slovenia, Croatia, Georgia, Lebanon, Hungary, Israel, South Africa, South America, Australia and New Zealand. I am sure that there are some other countries I forgot. I also love Grappa and Aguardente/aguardiente!!!! My specialty is Italian wine, but because of travels for the last five years Portugal and Spain are becoming other areas of focus for me. I am also an ambassador for an organization focused mainly on small producers in the Douro region of Portugal and am being roped into being one of five points of light for one Spanish producer over here in the US.

Note: I am not a wine expert. And truly there are no wine experts at all. I would consider myself a wine vivant, but I am also a negociant as well as importer and distributor. I have read some of the course work for several different certifications, but I think that to really understand wine, you have to drink it... a lot of it. And this takes time. Some say that if you were to have a different type of wine every day from the time you were born and you made it to one hundred years old, you would still have only had maybe thirty four percent of just the types of wines that exist. It took me several years to develop a palate for red wine, as it does most people. Hell, most kids can't stand beer the first time that they have it, but by a certain time...

Anyway, this is me. And yes, there is a lot more to it because there is a lot of things I have done. But I am always happy to sit down with folks over a glass and chop it up!